Not a bad week.

As to this week’s roadmap, some of the things are the same but there are also some new entries to the list.  As always, we are including all of our major doings here, even if they aren’t related directly to Camelot Unchained.

Today also marked our first “2 for 1” day for new employees. Joining our crew are Renee Machyousky and James Brown. Renee will be acting as our Community Manager and also replace the irreplaceable Anna Luu when Anna’s husband’s assignment in the U.S. Armed Forces takes him out of the Washington, D.C.  Mail carriers, delivery folks and cold-callers will rejoice since nobody messed with our Anna (well, and survived). Fortunately for us, Anna will still be working with us, albeit remotely and we will all miss her terribly. James is joining us a Gameplay Engineer and has won the contest for “Coolest Programmer Name Evar!” hands down. Next week our Producer will be joining us after he completes his cross-country move.

The final part of today’s update is the introduction of our next possible race, the Arthurian Stormriders. I conceived them as a human race with a cool backstory that also drew on and echoed some of the Arthurian legends (albeit in a very general way). There’s definitely some “read between the lines” stuff in there and, I think, a pretty cool race. As a bonus, this is the first story that has been edited/worked on by someone in addition to myself. This story had a volunteer copy/developmental editor who worked with me on the material and I hope, this time, you all enjoy the story and the writing style itself.  She did a great job and I couldn’t be more pleased with the end result!

Come and sit, friends, and l will tell you a tale of Arthur’s most trusted subjects, the Children of the Lake, also known far and wide as the fearless Stormriders. While other mortals cower and flee before the Veilstorms, the Stormriders embrace their coming and stand before them in defiance. Despite this, they are not a reckless folk but rather are ruled by law. They bind themselves to Arthur’s code and their own law, called the Rider’s Oath. This code, you see, forms the blueprint for their whole society, the definition of what it means to be a Child of the Lake.

Being an organized people, Stormrider society is divided into five castes: the warriors, the scholars, the merchants, the makers, and the hearth-keepers. Each caste represents a wide range of ability. Warriors do not simply fight with sword and shield but face their realm’s enemies on whatever battlefield they must, meeting their opponents with the strength of magic or steel. Scholars approach life’s difficulties with thought and study and share the secrets they discover throughout the realm. Makers build or shape their solutions, while merchants call upon who they know, what they own, or how they can bargain to resolve conflict. Lastly, the hearth-keepers face the world with wisdom and a parent’s intuition. Not by birth are these castes assigned but by each individual’s choice and whatever the caste a candidate chooses, male or female, the Stormriders respect and honor this choice. No greater sin is there among them than to force or coerce a person into choosing a caste. By this freedom of choice and strength of will are the Stormriders defined.

If you were to try to pick a Stormrider out in a crowd, it might prove a challenge for they appear human enough. However, the Stormriders have one physical trait that announces their coming: a small jewel in their forehead. This jewel is a mark of the caste and it draws its power and color from the Stormrider’s body. While the Stormriders are essentially human, their life cycle is not. They stay in a child’s form for nearly twenty years, all the while learning from the elders and masters of each caste. The elders encourage the young ones to pursue what their heart desires. Girls learn to take up arms just as boys learn to keep the hearth and home. To the Stormriders, the freedom of choice is far more important than the shape of the body. This freedom applies to every member of his or her own race and, in their opinion, to all the other races of Arthur’s realm.

When the child is ready, the young one kneels before the elders of the chosen caste and asks for admittance. Once granted, the child is then led to the Lake of Storms itself and commanded to drink deeply from its Veilstorm-infused waters. This taste of magic awakens the might of the soul, and the child’s body begins its transition into adulthood.

During these formative years, the adults of the caste challenge the young one’s choices, so to ensure that he or she is making the right decision. There is no shame in changing one’s mind at this stage, for the young heart is fickle and it takes great maturity to listen to its true calling. The elders also instruct the child in the complete Rider’s Oath. In part, it goes a bit like this: without faith, our purpose will not shine brightly / without conviction, our faith is but an illusion / without honor, conviction can be turned to evil. There is more, but only a Stormrider may recite it in full and it is very long for it is contained within and is also the history of their people. Only once a child fully embraces the Rider’s Oath are they allowed to request to face the trial that determines whether they can become a Stormrider. Kneeling once again before the caste’s leaders, the adolescent humbly asks embark upon his or her final and most dangerous test. Candidates that are deemed ready will spend this night preparing for their final trial. The Stormrider saying of “As is the mind, so becomes the body” is especially true this night. For before facing a Veilstorm the candidate must focus on a single goal, to desire nothing else but to be the living embodiment of their caste. There is no proscribed way for this vigil and sometimes it takes the form of quiet reflection, other times a candidate may recite the Rider’s Oath again and again and some candidates have been known to try to exhaust themselves physically through manual labor.

As I have said, the Stormriders embrace and defy the Veilstorms. It is not from the riding of a mere animal, no matter what size, that the Children of the Lake have earned their other name. The name is born from the tradition of the final test, the riding out of the totality of a Veilstorm. It is a terrible and solemn ritual. A pair of elders leads the nearly grown youth to a ceremonial place where a Veilstorm bolt once split a rock in twain. They strip the youth bare and bind one arm and both legs to either side of the cleft rock. In the free hand, the candidate holds a sacramental knife, forged of the purest steel, and inscribed with his or her true name. The elders leave the adolescent alone and naked to face the full might of a Veilstorm. Some scream, some shout, some sing, some weep, and the rare, strange few stay silent, but no matter how the candidate cries and struggles, the elders do not intervene.

The storm changes the youth before their very eyes: pulses of light drift beneath the skin, ribbons of energy course through loosened hair, and beams of light shine from the pupils. Subtle lines crisscross their body from the paths of raindrops; each track signifies a lost impurity. When the storm passes, the elders rush to the candidate, unbind, and wrap him or her in warm towels and blankets. Then, they rigorously scrutinize the candidate for any anomalies. A candidate affirmed in his or her chosen caste discovers that the storm has bestowed gifts upon him or her: great strength or energy, a swifter mind or sharper senses, heightened talent or impressive fecundity, and so on, as befits his or her new role. When the elders confirm that the candidate is whole and well, they announce the arrival of the new adult as a Stormrider. Then, a joyous celebration is held with songs of past triumph, dancing and revelry, and such food and drink as you can only imagine, friends.

Know this, though: not all candidates who stand before the storm pass their trial. If the candidate uses the knife to cut the binding straps, it is considered a sign of weakness. If the youth is unchanged by the Veilstorm, the nascent Stormrider must leave and never return. If malevolent change has taken place, the candidate’s fate is most terribly sealed. There are also some who enter into the first Riding with a weak will or darkness in their hearts. For this, the storm punishes them, twisting their bodies and minds to match the void within them. Some of these abominations realize what they have become and beg for a swift and merciful death. These imperfect candidates are given the choice to either take their own life by using the ritual knife, or to die with dignity at the hands of the elders. Regardless of their choice, they are then given a proper burial and the honor of keeping their birth name. However, friends, there are those who fail completely and become true monsters. For them, there is no salvation. They are put down like the raving beasts they are, and their name and history is stricken from the memory of the people, never to be spoken of again. Harsh, I know, but such are the traditions of the Stormriders. There are also a select few for whom the storm chooses a different caste than the one pledged in their youth. These transformed young adults face a choice between death, exile, and Riding the storm again. Nearly all choose the latter. Those who fail the second test almost always become true monsters, but those who pass are forged into something new, something chosen by fate. They are called Stormchosen, and it is said that they are destined to do great things.

You must be wondering, friends, who I am to know these secrets. Let it be known that I am one of those from whom the Storm had other plans. Alas, friends, I did not have the courage to face the terror of a second storm, so I chose exile instead. Thus, here I am, cursed to wander this world and share the story of my filing. As to my name, I was once called Medraut.

Thus ends the tale of the Children of the Lake.

I’ve also included some shots that show off our UI/Web interface in action with both an IRC channel on the main display as well as a familiar web page.  I’ve also added some additional environmental concept art to add a little color to this piece.

That’s it for today! 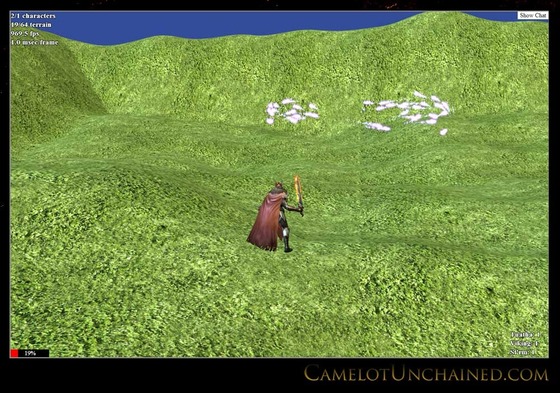 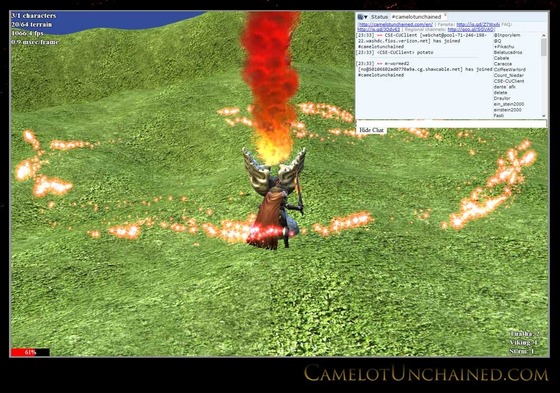 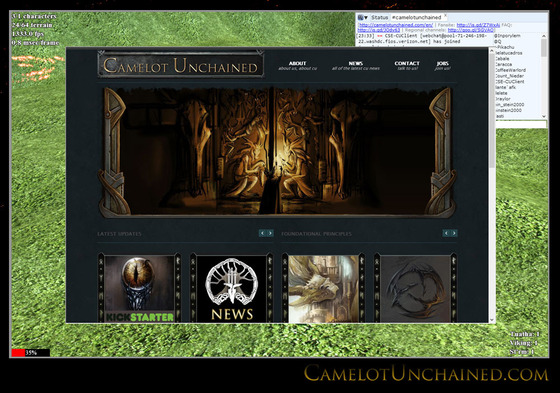 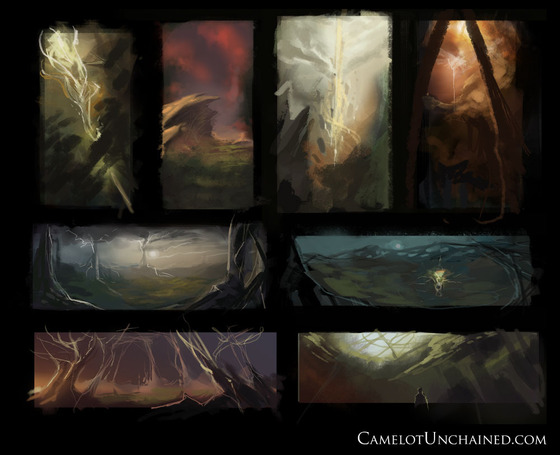 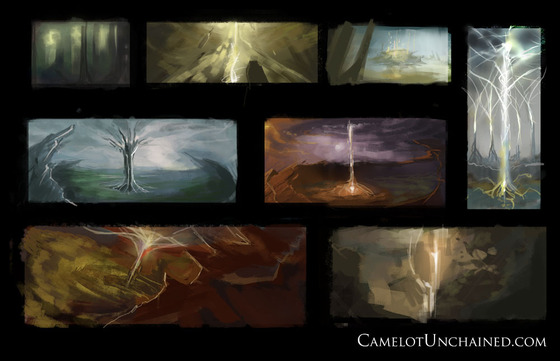 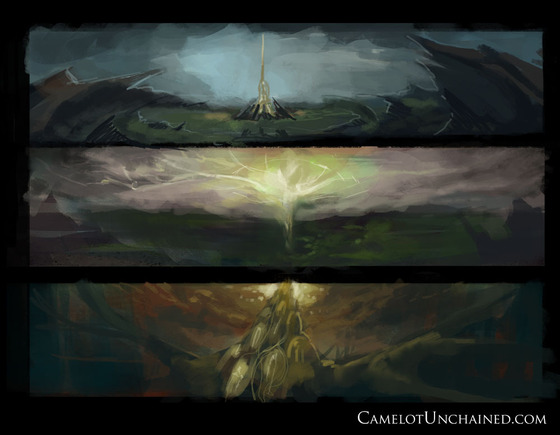