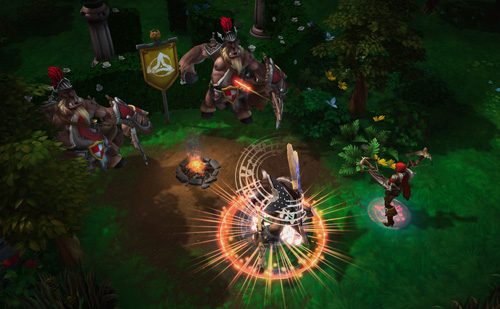 Heroes of the Storm, Blizzard’s upcoming MOBA title, has opened sign-ups for an upcoming beta test that’s expected to begin in the first half of 2014.

Blizzard released a comprehensive FAQ about the game during BlizzCon 2013. You can read it in full below.

Q: What is Heroes of the Storm?
A: Heroes of the Storm is a free-to-play online team brawler, starring your favorite Blizzard characters. Build and customize heroes from across every Blizzard universe to suit your play style. Team up with your friends and engage in fast-paced mayhem across varied battlegrounds that impact strategy and change the way you play the game.

In each match you can select from an array of Blizzard heroes and join a team to battle against enemy players, with the ultimate goal of destroying the enemy base. You’ll have the opportunity to stage classic showdowns such as Raynor vs. Kerrigan, or mix and match heroes from different games to fight together and against each other.

Each hero starts the game with a set of powerful abilities and traits, and over the course of the battle you’ll have the ability to customize your hero with unique talents and heroic abilities. While each hero has certain core strengths, the talents you select can greatly change the way your hero fights. Support heroes like Uther for example, can be played as almost a pure healer, or can take on more of a damage dealing role.

Q: What makes Heroes of the Storm different?
A: Heroes offers a uniquely Blizzard take on the genre. You’ll choose from an array of different Blizzard heroes, each of whom is customizable through a versatile talent system. One of these talent options is a selection between different ultimate heroic abilities. Arthas, as an example, can choose the ability to call Sindragosa, a giant frost wyrm, to do a strafing run. Or he can raise an army of the undead to swarm the enemy. Which one is better? Well, that’s like asking if dragons or zombies are more awesome—that’s up to you. Cool choices like these exist in each hero’s unique talent array.

The game also offers a selection of different battlegrounds to fight on. Each battleground has a special secret that can affect the overall strategy of the match. In Blackheart’s Bay for example, a ghostly pirate ship has taken up residence in the center. Treasure chests of gold coins spawn periodically on either side of the battleground. You can collect these coins or steal them from enemy players to pay tribute to Blackheart. Pay enough bounty and he’ll train the ship’s cannons on enemy fortifications for terrible, terrible damage. The Cursed Hollow battleground offers a different challenge. Here, the fickle Raven Lord holds sway. During the fight, tribute totems will spawn periodically — collect enough of them and the Raven Lord will curse the opposing team, disabling their towers and weakening their minions for a period of time.

Many of the battlegrounds share environmental features, like forts, which are sprinkled along the pathways between each team’s base. Each fort includes structures such as gates to prevent enemy movement and healing fountains for health and mana regeneration, in addition to a protective guard tower. Capturable watchtowers also mark important positions on many battlegrounds, offering vision on key areas.

Another differentiator with the game is match length. With a target game time of 20 min, Heroes of the Storm concentrates the intense battles and back-and-forth gameplay of online brawlers into fun, quick, action-packed matches, the perfect length to knock out a few games on your lunch break.

Q: Which heroes are in the game, and what roles do they play?
A: 18 heroes are available for battle in the BlizzCon demo of Heroes of the Storm, but this is just the first group of characters that have been sucked into the Nexus. Many more heroes will join the battle over time from Azeroth, Sanctuary, and the Koprulu Sector. But who knows? The Nexus may draw from other dimensions in the future as well.

Each hero offers different strengths and weaknesses depending on their role. Warriors such as Diablo can dive right into a melee, soaking up damage and dealing it back. Assassins like Kerrigan deal tremendous damage and can pick off unsuspecting enemies, but must choose their battles carefully, as they can dish more than they can take. Support heroes like Uther can swing the tide of battle, assisting with healing, buffs, or other abilities to manipulate the battle in the favor of allies. Other types include the siege and commander heroes, which are more specialized roles that bring different strengths as you build a team.

Q: Heroes of the Storm is free-to-play—what is available for sale and what can be earned in game?
A: We’ll discuss more details about how the business model works in the future. What we can say is that you will be able to unlock heroes and other content just by playing the game. Cosmetic upgrades like skins, equipment, and mounts will be available. New heroes will also be released over time, along with new battlegrounds, though battlegrounds will probably be freely available to all players. It’s also possible that additional talent options for existing heroes could be available as unlockable content.

Q: What kind of post-launch support is planned?
A: We will announce specific plans for post-launch support at a later date. But we can say that the Nexus is quite a powerful dimensional storm—new heroes are arriving all the time. That being the case, you can expect to see regular drops of new content throughout testing, as well as after the launch of the game.

Q: Is it required to have StarCraft II to play?
A: No. Heroes of the Storm will be a standalone game, separate from StarCraft II.

Q: On which platforms will Heroes be playable?
A: Heroes is being developed for PC and Mac.

Q: Will there be a beta test? When will it start? How can I apply for the beta?
A: Yes we do intend to run a beta test for Heroes of the Storm in the first half of 2014. We’ll announce more details at a later date. Now is a great time to visit the Heroes of the Storm website and sign up for the closed beta as we begin preparations.

Q: When will Heroes of the Storm be released?
A: We don’t have a release date we can share at this time. We’ll have a better idea for a release window after we start beta testing.

Q: Is there something else you can tell me about the game?
A: Not right now.