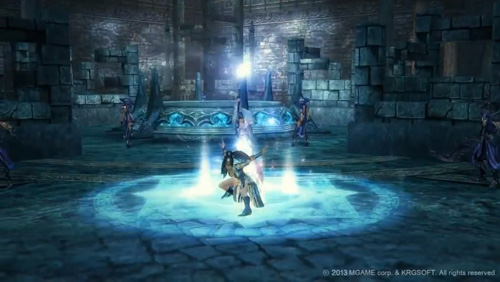 Key Features:
• Air Sprinting – The Air Sprint System allows players to boost their movement speed and glide through the air. Whether killing monsters or fighting other players, you can use Air Sprint anywhere in the map. The game has 15 Air Sprint motions that are based on Martial Arts movies.

• Advanced Skills – After meeting a specific criteria, players can unlock the advanced skills for each character class. These skills can be used while performing Air Sprint.

• Faction War – After reaching the required level, players can now participate in grand scale battle between the Order and Chaos factions.

• PVP Instance Dungeons –The game features a PVP type instance dungeon between Order and Chaos factions. Players can gain rewards and titles in this scheduled mode.

• Maze Forest – A MOBA type PVP mode where players must form teams to automatically match up with other teams.

• Pet System – Pets in Yulgang 2 can be mounted, support its master or attack opponents. They can be raised by the player as: Offensive, Defensive, Transport or Support type.

• Farm Mode – Players can enter the Yulgang 2 Farm mode and create their own farm. Similar to other farm simulation games, the farm can be decorated with various objects and produce numerous items. Also, the reward increases when you visit/help others’ farm.

This is a game that i have been very addicted to its name is war thunder it is a very good air combat simulator here is the link to play the game : http://ww…
Video Rating: 0 / 5