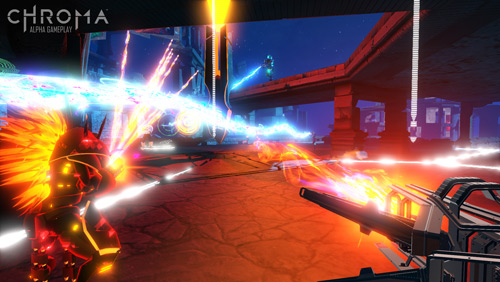 Info: Chroma is a music-driven online FPS developed by Hidden Path Entertainment and Harmonix Music Systems. Join the fight as a Fader, a musical icon of the future, and battle for control of the all-encompassing cultural feed known as The Signal. In Chroma, music is your weapon. Sound is your arsenal.

• Music is your weapon – Unleash streams of sound and music with your arsenal and bring the musical landscape to life in battle! From deep wobbling bass to the crunch of an electric guitar, crushing metal drums to poppy synths, choose a weapon load-out that reflects your musical tastes and personal style and take your sounds into battle.

• Band together – Your team is your band: Join up with your friends and battle for glory. Master multiple classes, each with their own unique musical gameplay mechanics and perks, and lead your team to victory.

• Conquer shifting terrain – “Change Ups” at major musical moments dramatically alter the landscape of the battlefield in real time both physically and strategically, raising sniper towers, adding cover, and more in sync with the music.

• Free-to-play, but not “pay-to-win” – Free to jump in and play with deep customization, but smartly designed to preserve a fun and fair experience for all players.