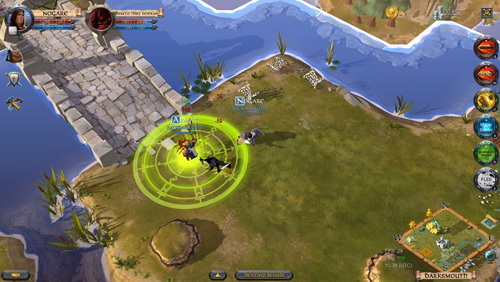 Info: Albion Online is a medieval sandbox MMORPG developed by Sandbox Interactive. The game is set in a cross-platform world where players can conquer, colonize and defend territories all in a classless character customization system tailored for dynamic full loot PvP battles where every encounter is different.

Key Features:
• Player-driven economy
– All items AND buildings are player crafted.
– Build your own villages and towns.
– Rent out land or industrial buildings to other guilds.

• PvP & Full Loot
– One of the first games to combine PvP, player-driven-economy and full loot in a free-to-play game.
– Death is meaningful as you can lose your whole inventory in a heartbeat.

• Free-to-play
– We, the developer, will not sell items to players. We act only as a central bank in exchanging currencies. Items and resources can only be bought from other players.
– Every player can realistically acquire every in-game item and every premium service without paying real money.

• Unique character customization
– There are no character classes in Albion Online. Your class is determined by what you are wearing!
– You can combine every item in the game. There are no boundaries as to what you can make
– Want to be a mage/knight hybrid with magical cloth armor wielding a sword and shield? In Albion Online, you can!

• Cross platform & one massive world
– Every player in Albion Online plays on one master server, in one huge game world
– Sitting in a café, playing on your tablet? You’re in the same world as your friend at home on their PC!

• Territory control system
– Our core gameplay involves conquering territories.
– Conquering and holding territories has many advantages:
– Access to resources and areas in which to build your village.
– Protection from the dangers of the wild and the demons of the void.