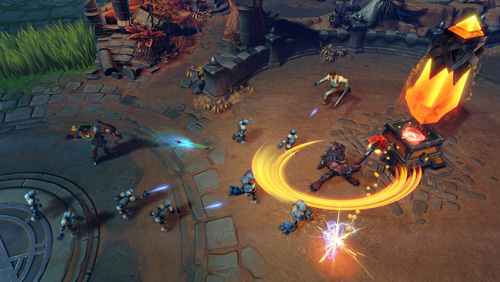 Info: Areana of Fate is a free-to-play MOBA game developed by Crytek. The game features fast-paced 5 vs. 5 battles and lets players step into the shoes of legendary heroes from history as well as fantasy.

Key Features:
• Choose a hero. Fulfill your fate.
Accept no imitations! Take control of iconic characters from history and fantasy, and discover what happens when they join forces and go head to head in the Arena of Fate!

• Form a star-studded squad
A lone person can change history, but it takes a whole team of heroes to alter fate! Arena of Fate invites you to play your part in 5 Vs 5 match-ups unlike anything you’ve experienced before, as the likes of Little Red Riding Hood, Joan of Arc, Nikola Tesla and many more come together to redefine the meaning of “dream team”. With so many high-powered heroes to choose from the possibilities are almost endless, and the battles are always legendary.

• Fast-paced battles with fresh gameplay twists
When the action gets underway in the arena, you’ll discover a fast-paced combat experience that is instantly accessible for newcomers but deep enough to captivate veteran campaigners too. With multiple ways to chalk up points across the battlefield, you and your friends will find yourselves in engrossing battles where every second counts, and everyone has a part to play in claiming victory.

Jurassic Park Builder is a Jurassic Park : Operation Genesis inspired game currently out for iOS and Android. Putting you in control at the start of Jurassic…
Video Rating: 4 / 5