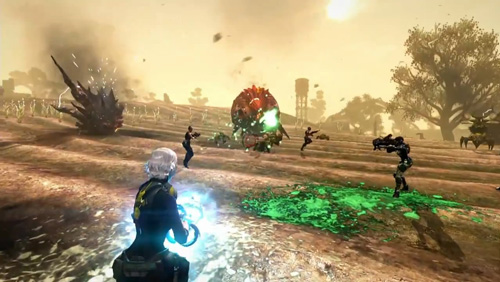 Info: Defiance is a sci-fi MMOTPS developed by Trion Worlds. In the game, players embark on a journey into a futuristic online open world shooter where the survival of Earth relies on their skills as an Ark Hunter, as they level up in massive co-op battles and fierce multiplayer combat.

Players can also hunt alone while improving skills and unlocking powerful modern and alien weaponry that is essential for survival in the constantly evolving online world. Defiance invites gamers to explore vast landscapes on a variety of vehicles while leading the charge in huge co-op battles. Immerse yourself in the world of Defiance as the game impacts, and is impacted by, the Defiance TV series on Syfy.

Key Features:
• An Adventure for the Masses – Lead the charge in huge co-op battles and fierce multiplayer conflicts across an immersive world.

• Customize Your Character – Custom character creation, where you can play as a human or alien, modify your appearance, upgrade weapons, select different specializations, and choose your own progression within Defiance universe.

• Call to Arms- – Level up and modify a wide variety of modern and alien tech weaponry.

• Change the Future – Impact television with your heroic adventures, and be impacted by events in the Defiance TV series.