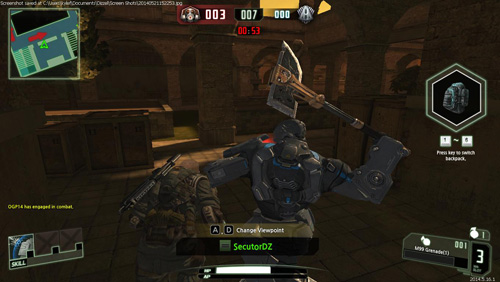 Info: Dizzel is a free-to-play online TPS developed by Neowiz and NS Studio. Set in the not too distant future, Dizzel features non-stop, heart-pumping action through a variety of unique maps and game modes. Featuring an over-the-shoulder shooter perspective, Dizzel bolsters a variety of powerful weapons, from assault rifles and shotguns to massive swords and axes, to slay your enemies. Combined with a variety of unlockable skills and power ups, the bloodthirsty soldiers of Dizzel leave a trail of carnage and bodies in their wake.

Key Features:
• Fatalities: Simply shooting your enemies to death is for newbs. Pull off brutal & stylish executions to finish off your enemies before their teammates can revive them.

• Take Cover: Pop in and out from cover with guns blazing like you are in an old-school John Woo movie, or unleash a barrage of bullets at your enemies from the safety of being behind cover. Aiming is overrated anyway.

• GAME MODES:
Killer Sentinels: Each team takes turns as the killer sentinel war machines, while the opposing team tries to survive by any means necessary.
Predator Mode: A player is randomly selected between rounds to be the ‘BOSS’, with tremendous speed, massive stat boosts, and a giant sword!
Team Death Match, Demolition and More!

• Weapons & Items Galore: With lots of guns, melee weapons, and grenades to choose from, it’s easy to personalize your killing style. Character, outfit, and equipment choices let you push the customization to the next level.

After a week of playing Hearthstone, I wanted to discuss my thoughts and impressions of the free-to-play gaming model.