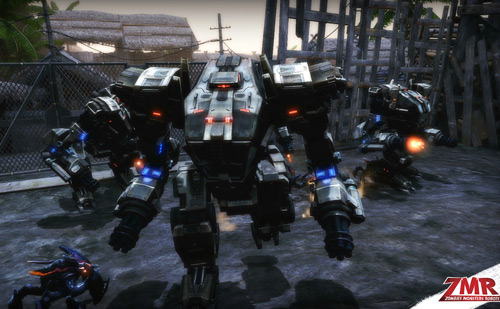 En Masse Entertainment, the publisher behind TERA, has announced a free-to-play online TPS called Zombies Monsters Robots (ZMR). The game, which is due for release on PC this summer, is developed by Yingpei Games (formerly known as Epic Games China) and the sequel to Mercenary Ops.

Here’s the official description of the game, from the press release:

ZMR pits players against an unexpected assortment of enemies, environments, and game modes. Gamers will battle monstrous enemies and bosses across a wide range of co-op campaigns and wave-based survival missions as well as fight other players in fierce head-to-head shootouts. Up to eight players can participate in co-op play while competitive modes support up to sixteen players. With a deep arsenal of customizable guns and gear, gamers will need to make every shot count as they enter a war against infectious zombies, abominable monsters, and murderous robots hell-bent on destroying mankind. Dynamic cover, blind fire, dodging, and active reload systems combine for strategic gameplay in which no two missions are alike, traversing locales from lush jungles to gritty industrial districts.