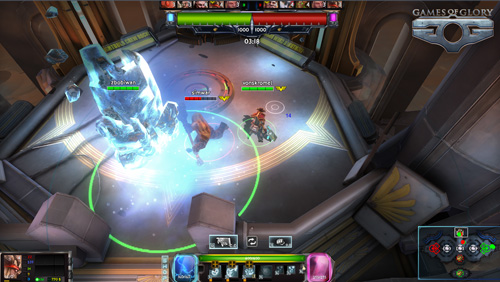 Info: Games of Glory is a sci-fi MOBA developed by Lightbulb Crew. The game is inspired by different video game genres and borrows its fundamentals from MOBAs while integrating the faster action controls and the flexibility in weapons choice of shooters. The persistent universe and social aspects are inspired by MMOs, and the opportunities for clone customization are drawn from Hack & Slash games.

Key Features:
• A Persistent Universe
Games of Glory takes place in a science-fiction universe, full of different species, planets and factions. The player takes the role of a Controller of Clones, battling for the influence of his political faction or club. Based on the wins or losses in the arena, the universe will evolve and the balance of power will change.

• Action Oriented Combat Mechanics
The game is changing the established rhythm of MOBAs as well as some of the basic notions of game play. Innovations like the elimination of auto-attacks with weapons, new types of mechanics like “white damage”, faster movement, and more put the player in the midst of a frenetic battle environment.

• Gmeplay Designed for Team-Play
Games of Glory is above all a game to be played in teams, built on collaboration between players. Each team has Clones that complement each other with their skills. Clones have similar functions to those in classes traditional in existing MOBAs: Tank, Carry, Scout, Assassin, Support. Each team elects a captain who suggests tactics in real time, and organises the team around the different objectives in the game.

• Varied Selection of Weapons
During each match, each player has the choice of which weapons to choose and how they will evolve. Weapons for close combat as well as lasers and rocket launchers give the opportunity to vary the way each Clone is played from match to match. In the middle of a fight the player has the ability to change weapons and surprise his opponents.

From the Creators of Halo and the company that brought you Call of Duty. In Destiny you are a Guardian of the last city on Earth, able to wield incredible po…