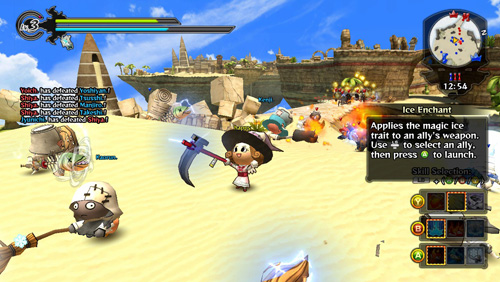 Info: Happy Wars is an online multiplayer action game developed by Toylogic. Enter the fray as one of the six player character classes – Warrior, Mage, Cleric, Berserker, Zephyr, or Engineer, each with different tactical strengths. Work together as a team to take down the enemy team and conquer their castle!

Players can obtain items such as character parts, weapons, gear and other various accessories with the Happy Stars earned during battles, or with Happy Cards, which requires the purchasing of Happy Tickets, and create their own unique player character to use for charging through the battlefields.

Key Features:
• This game is a free-to-play downloadable game that everyone can enjoy.

• Teamwork is the key to victory in the online multiplayer mode. Work together with your teammates to launch powerful tide-changing team skills!

• In addition to the online multiplayer mode, the game also offers a Co-Op mode where you can join forces with other players and play against teams of unique AI characters, as well as a single campaign mode where you go on solo missions.

• Items obtained through gameplay can be used to customize your player character. You can even power up items by merging them together!

• Items and character customization parts are to be released online regularly following the game’s release.

Thanks for stopping by! This is one of my day specials where me & some friends play Free to Plays checking them out. I hope to grow with my friends & with su…