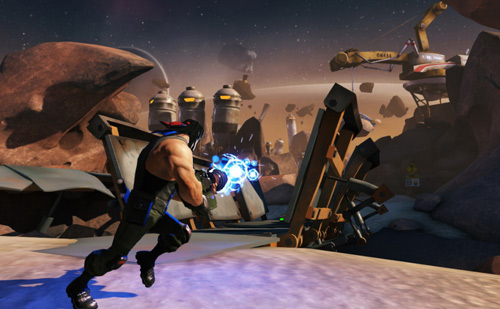 Loadout is a new online TPS from the veteran developers at Edge of Reality.

Free-to-play online shooter Loadout is set to launch on January 31, developer Edge of Reality has announced.

“After spending the last two decades contributing to the development of some amazing franchises, like Mass Effect, Tony Hawk’s Pro Skater, The Sims, and Dragon Age, Loadout is our studio’s first original IP, and we couldn’t be more excited to open it up to the masses,” said Rob Cohen, CEO of Edge of Reality. “We started this as a passion project, working on it when we could, and trying to create something original and truly player friendly. What we’ve got now is a game that’s a blast to play, quick and easy to get into, and empowers players with insane amounts of customization.”

Loadout is a fast-paced online third-person shooter with a robust weapon crafting system. Edge of Reality claims that there are billions of weapon combinations in the game.

Here’s the official description of Loadout from Edge of Reality:

Loadout is a new, outrageous multiplayer shooter that’s all about building guns and having fun. Although Loadout is a 3rd-Person shooter, it feels more like a first-person shooter, but with 10 times the agility.

You want a launcher that shoots ground-skimming rockets that explode into destructive clouds of flak? You got it! How about a gun that shoots syringes filled with healing green goo that bounces off walls? It’s done Son! What about a remote controlled missile that sticks to enemies before frying them in a massive blue ball of electric destruction? We got you covered.

Loadout is about total and uninhibited player expression. Craft your own guns, design your own load out, customize your character to the nines, and define your own play style.

Loadout will launch on Steam as a free-to-play title on January 31, 2014. The game is currently available in closed beta form on Steam Early Access.