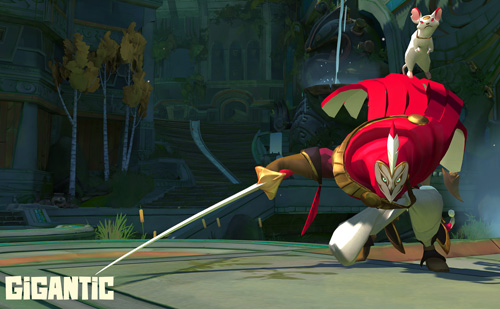 Gigantic is a 5v5 online action game where players battle alongside massive beasts.

“The gameplay in Gigantic is about creating opportunities to be heroic,” said James Phinney, Vice President of Product Development . “Whether you’re rescuing an ally, sneaking behind enemy lines or facing off solo against a towering guardian, there are dramatic ways to turn the tide of battle.”

Motiga is a new independent game studio based in Bellevue. The studio has several industry veterans in its ranks, including former NCsoft West CEO Chris Chung and StarCraft and Guild Wars lead designer James Phinney.

Gigantic has been in development for two years and is scheduled to launch in 2015 for PC. You can learn more about the game and sign up for an upcoming alpha test by heading over to the game’s official website.