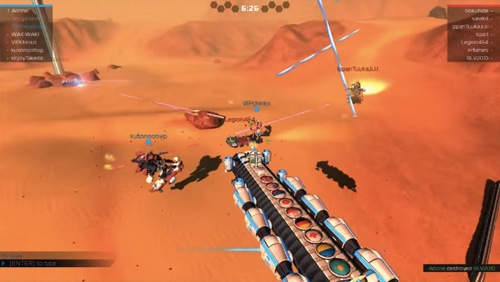 Info: Robocraft is an online multiplayer vehicular combat game developed by Freejam. In the game, players build their own robo vehicles, adding wheels, jets, guns, wings and then take their vehicles into intense online multiplayer battles.

DRIVE – Jump in the Pilot seat of your Robot and drive it into battle in Jet Cars, Tanks, Flying Warships, anything you can dream up

Key Features:
• Over 100 cubes and components to collect and combine to make a million different Robot designs
• Watch as you enemies Robot breaks apart cube by cube as you destroy them with powerful weaponry
• Auto-repair your Robot and head into battle again gradually building your resources to make your Robots more powerful
• Invite Friends, chat in game
• Form Platoons and battle on the same team
• Save your Robots in the Garage in the cloud
• Access your game account from any PC anywhere via Robocloud
• Free-To-Win, everything required to get to the very top of the tree in Robocraft can be gained for free

Go To Playzmr.com or click the link in the description below to play ZMR for free right now http://bit.ly/TwV1Hz Make sure to “Like” on this video and “Subscribe” if you enjoyed this video…
Video Rating: 4 / 5