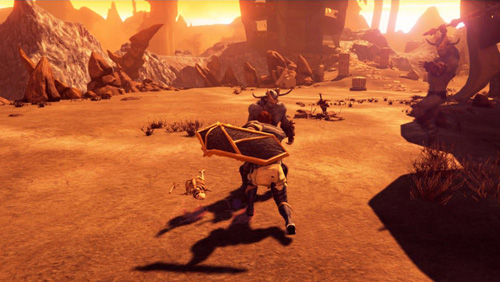 Info: Skara: The Blade Remains is a free-to-play multiplayer online versus game developed by 8-bit studios. Unlike simple versus games that have players facing off, SKARA is set in arenas where as many as 16 players can fight at a time.

In the game, players choose from one of the different races, each with unique skills and combat styles. Races divide into teams called factions and fight to ascend in rank. The best players rule their factions, the best factions rule SKARA.

Key Features:
• Skill-based combat: Skara is about skill, timing, accuracy and practice. As in a Versus, knowing your combos and the best moment to use them is crucial to survival in our arenas. Dodge, counter-attack and execute your enemies with spectacular fatalities.

• 5 races: Choose one of Skara’s “races”each with their unique weapons and fighting style. Choose how your character looks, from their armor to their fighting style.

• Game modes: There’s not always time to play for hours on end. Players can open Skara for a five minute skirmish or several hour long faction battles. Game Modes will include Free-for-all, Team Deatchmatch, Siege, Kill the King, Dominion or Capture the flag.

• Arenas: Skara is comprised of arenas, which players enter into to fight. Certain game modes allow for factions to fight to dominate arenas as territory. This will be charted on our interactive map.

• Fatalities: Customizes the way enemies are dispatched with spectacular fatalities.