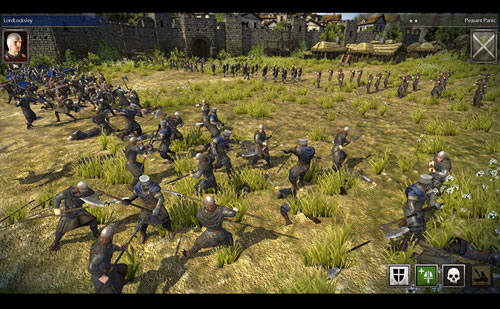 Set during the chaotic turn of the 10th Century; the world starts to emerge from the Dark Ages divided and at war. Combining realm-building with large-scale tactical battles, players will find themselves managing the needs of their own fiefdom as they marshal formidable armies with which to duel against neighbouring kingdoms. Ultimately, players will be able to join in massed multiplayer wars against other lords in a fight for the throne. Deception, spying and outright betrayal against enemies and friends alike will see the devious player rewarded.

“Adding depth, persistency, and learning from our experience with Total War Battles: SHOGUN, we wanted to create a new way of playing Total War Battles. Whether that’s on the move or at work over lunch,” said Renaud Charpentier, CA Digital Project Lead, “It shouldn’t matter where you want to play, we want to make it easy to come back again and again to your flourishing Kingdom. Then, we ramp up the complexity and challenge, adding more options to your Machiavellian schemes.”

Total War Battles: Kingdom is in development for PC, Mac and tablets. The PC closed beta is set to begin soon and you can sign up for the beta right now over at the game’s official website.