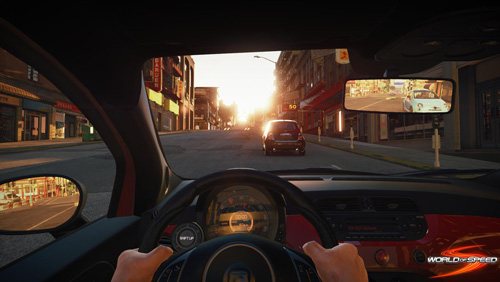 Info: World of Speed is a free-to-play racing MMO developed by Slightly Mad Studios. The game allows players to hop into the driver seat of their favorite cars and race across real world circuits and tracks carved from the streets of real world cities. As an online experience, players will be able to create and join in-game Clubs, compete against other players and teams in a variety of diverse team-based gameplay modes, interact and show off in the Airfield social hub and dominate the world in Territory Wars.

• Action – World of Speed takes action-styled racing games into a new era by combining AAA HD graphics and visuals with the thrill and intensity of a massively multiplayer online competitive experience.

• Teams and Clubs – Players can team up with friends and other players in multiplayer matches or form Clubs where they can customize their logos, earn access to a Club garage social hub, compete against other players and rival teams, show off in the Airfield arena and battle in high-stakes races in Territory Wars.

• Tracks – Race across iconic licensed circuits and custom built tracks based off real-world city streets – from Brands Hatch and Laguna Seca to the streets of London and Moscow.

• Competition – World of Speed introduces a new level of connected competition allowing players to join random teams, or their friends from their Club, to engage in an ever-expanding number of gameplay modes where each racer plays a strategic role in how a match unfolds.

• Visual & Performance Tuning – In World of Speed, unlocking a new car is only the beginning. Players will be able to customize their cars like never before to both visually personalize and performance maximize.

• Future – Designed as an evolving online experience, World of Speed will be supported with regular updates and the addition of new cars, tracks, gameplay modes and much more.