RPG TITLES » Preview » What Will Blizzard Reveal at Blizzcon 2014? Preview

What Will Blizzard Reveal at Blizzcon 2014? Preview

Blizzard is a company with franchises so big, they’re able to have their own convention: Blizzcon. While everyone has to hustle for attention at E3, Blizzard bides its time for November and releases updates to all their big series. But what are the big announcements going to be this year?

Some of them are obvious; after all, the panel schedule is online for everyone to see. First, here are a few things we’re almost definitely going to hear about:

There aren’t a lot of new, big details to reveal about Warlords of Draenor, but we’ll still hear more interesting tidbits about the entire experience leading up to the expansion’s release on November 13. We’re also likely to see the first trailer for the movie, which finished filming earlier this year. It’s a huge project for the franchise, and there’s a panel slated to talk about the movie. Trust us, there’s going to be a trailer.

It’s about time for a new expansion announcement, and with that new expansion, we’ll likely hear about a new class added to the game’s roster. After the Paladin-like Crusader from the Diablo III expansion Reaper of Souls, the most-likely addition this time will be a character like the Druid from the Diablo II expansion Lord of Destruction. Diablo III needs a shapeshifter or elementalist, and a Druid would fill that void nicely.

Heroes of the Storm

It might not be open right away, but we’ll likely hear about a closed beta sign-up for Heroes of the Storm during the show. And who better to be a part of that beta than the attendees of Blizzcon? Whether you’re watching at home or you’re on the show floor, there’s a possibility that you’ll get to try out the next step in Heroes of the Storm’s journey to full release. We might hear some more about new characters coming to the roster as well, but there’s more talk about those possibilities in the section below.

Get ready to watch a Legacy of the Void cinematic. Maybe we’ll see some gameplay as well, but Blizzard loves to make a splashy opening, and a strong cinematic is always a great way to build hype.

The next expansion for Hearthstone will be a big, 100-card addition to the game’s deck, and during Blizzcon we’re going to learn what those cards are. With such a huge addition, it’s not likely that the expansion will be available to download right after the show, but we’ll likely learn about the release timing.

It’d be nice to see the game running on phones as well. The Android tablet version is already on the way before the end of this year, but the phone update was delayed until 2015. Blizzcon would be a great place to show off what the Hearthstone team has in store for the smaller screen version of the game.

Blizzcon always a few surprises, and judging by quite a big gap in the panel schedule on Friday, we might be in store for a real bombshell. 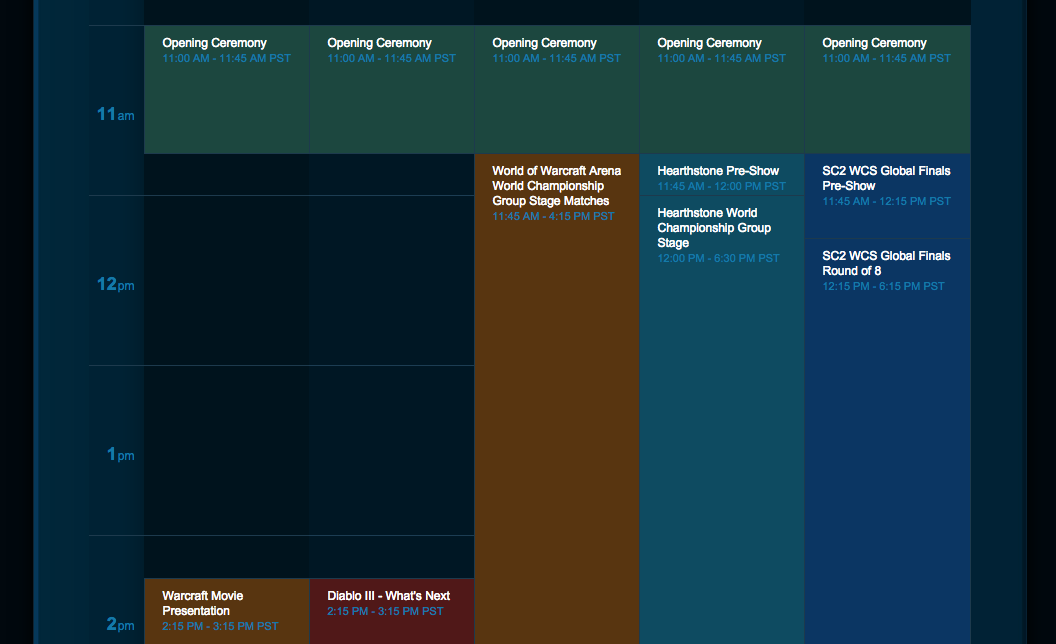 You’ll notice in the picture above that, after the opening ceremony, there’s a two-hour gap on the main stage. That’s more than a little odd, and it’s possible that it’ll get filled with a last-minute announcement of something big. So big that Blizzard doesn’t even want to tease it. What could that be?

It’s about time Blizzard brought Warcraft back to its RTS roots. It’s been over 13 years since Warcraft III: The Frozen Throne was released. And fans have been clamoring for another Blizzard RTS game that also lets you experience more of Warcraft’s rich history and lore.

At the very least, Blizzard could test the waters with an HD upgrade of Warcraft III. Please?

Maybe remaking the classic puzzle-platformer, The Lost Vikings, for current-gen consoles would be a stretch, but bringing back these three wayward characters in some way for the console would both give Blizzard an excuse to tickle the nostalgia of older fans, and also give them an original game to bring out on PS4 and Xbox One.

In the meantime, it’s very possible the direction-impaired trio will be introduced as new characters for Heroes of the Storm.

Blizzard might not want to steal the thunder of Draenor by making another huge World of Warcraft announcement so soon. But at the same time, the developer has talked over and over again about making the game a yearly franchise. So why not introduce at least the name, a hint of what’s to come, at Blizzcon this year, and then release the full expansion just after the conference next year?

While we’re being crazy prognosticators, why not go all out: Blizzard has been secretly working on Ghost all along, and we’re finally going to see a trailer for it this year. After all, Ghost has never been “officially” cancelled.

The long-rumored “Next MMO,” Titan, was cancelled earlier this year, but development halted over a year ago. But where has Blizzard put those resources in the interim? Given the inability of any other MMO except World of Warcraft to gain a real foothold in the market, plus the time and resources required for a game of that scope versus a breakaway hit with a small staff like Hearthstone, it’s likely that Blizzard has been experimenting a lot more with small team content. Whatever they reveal at Blizzcon could be another out-of-left-field announcement that ends up being yet another addictive hit in the Blizzard pantheon.

What do you think we’ll see at the show tomorrow? Let us know in the comments below.