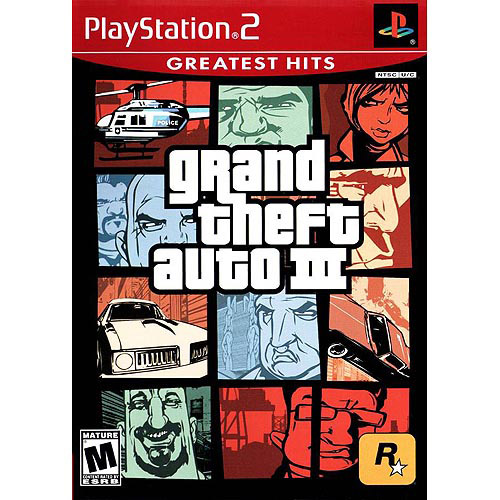 Liberty City is a complete physical universe with laws, rules, standards, ethics and morals. They are yours to shatter. Over 80 gangland missions and loads of side missions. Work your way through the hierarchy of the gangs, meet bigger bosses, get better jobs. Multi-layered missions interweave story elements from level to level. Revenge plot drives the player through the game, whilst retaining non-linearity and freedom of previous games. Over two dozen ways to take out another character: fist fighting (punch, kick and head butt), base ball bat, handgun, Uzi, machine gun, M-16, rocket launcher, grenade, Molotov cocktail and flame thrower. Organized police forces including cops, SWAT Teams, FBI, and the Army work strategically to keep Liberty City properly corrupt and somewhat safe. Liberty City is divided into 3 districts: industrial zone, commercial district and suburban neighborhood all connected by bridges and tunnels. Each has its own look and feel – different kinds of buildings, cars, and inhabitants. As you progress through the game, new areas will open up to you eventually allowing access to the whole city. The streets of Liberty City are jammed with over 50 vehicles, each with their own physics. All ripe for the plucking, cabs, sedans, family cars, mini vans, SUVs, trucks (pick-ups to 18 wheelers), sports cars, convertibles, buses (school buses and metro buses), fire engines, ambulances, SWAT vehicles, and even the ice cream man are on the move in fear of losing their ride. When trying to escape a jam, boats and trains help transport players from one side of the city to the next. Vehicles take damage on 18 different panels. The time of day and night affects every mission. This city is a very different place at night and some missions can only be performed at certain times of day. A full-weather eco-system (including rain, fog, thunder and lightning) also affects gameplay. For example, rain makes roads slippery, fog reduces visibility, etc. Unpre