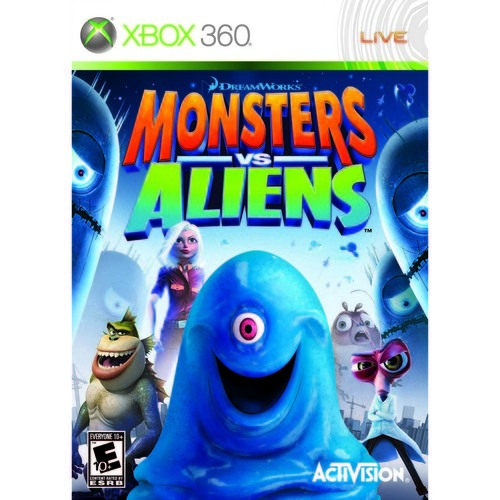 Play as your favorite monsters from the film – The rag tag team of monsters are tough, funny and sometimes misguided, but all together are a force to be reckoned with, both in their alien battling abilities and wise cracking personalities. Players relive their hilarious antics from the movie and create an all-new adventure in an epic battle to conquer mankind’s biggest threat, Gallaxhar and his giant alien robots. Experience unique gameplay as different monsters – Challenges stay fresh and lively through more than 12 distinct levels as players switch between characters, each with vastly different capabilities and sizes. The Missing Link: Utilize his skillful acrobatics to cling to and scale various surfaces. His agility and brut strength lets him take down enemies of all sizes. B.O.B.: The gelatinous B.O.B. can swallow and spit out enemies and objects, stretch, bounce, stick to walls and ceilings and seep through grates and cracks. Ginormica: Her enormous size allows players to race through the city using cars as rollerskates and her sheer strength comes in handy to lift heavy objects and brawl with the robot army. Dr. Cockroach, Ph.D.: As the brainiest of the group and the mission giver, Dr. Cockroach, Ph.D. is playable at any time in co-op mode to assist with slowing down enemies, overcoming obstacles and grabbing collectibles. Insectosaurus: Command this enormous 350-foot tall monster in epic battle sequences against giant robots. Insectosaurus shoots silk and has a piercing sonic scream that will have enemies running. Explore cool locations from the movie and more – Visit cool locations from the film and beyond including the streets of San Francisco, Gallaxhar’s huge overcompensating mothership and the super secret government containment area. Game exclusive levels, areas and locations include the inside of a 400-foot tall mining robot, a giant scorpion robot, a deeper look into the monster containment facility and Gallaxhar’s mothership. Work as

Reality Is Broken: Why Games Make Us Better and How They Can Change the World
A visionary game designer reveals how we can harness the power of games to boost global happiness. With 174 million gamers in th…