With sandbox games still on the rise, this upcoming title created by Nerd Kingdom presents itself with a more primitive tone and feel. TUG: The Untitled Game is a multiplayer sandbox RPG where players can create a near infinite world to explore, control and survive in. With two game modes currently available in the alpha version, including Creative Mode where players spend their time reshaping the environment, and the Survival Games where players attempt to assassinate each other, these modes will easily offer many hours of fun for those that have vivid imagination… or those that have a constant need to virtually kill their own friends.

Luckily, I was given the opportunity to hang out with the development team behind TUG and got to try out an early alpha version of the game before anywhere else, so sit tight as we jump in head first into a world where only the strong survive.

So for this session, it was completely focused on the Survival Games mode, and the rules are simple: Be the last player standing. Other than that: It’s anything goes. You can try and form alliances with other players, but don’t expect the truce to last very long. In the end, there can only be one! And I was aiming to be the one…

Once I joined up with the development team, we started up our first five-way survival match, and the first thing that was one my mind: hoard supplies as soon as possible. The environment was separated as one part forest and one part desert, and both sides had plenty of trees, rocks, roots, fruits and other natural items that can be used or manipulated by the players.

First thing I started to search around the forest area for was any branches or twigs I could use in order to make into a pickaxe. Once I found a set of twigs, a stick and a pointy shaped rock, I started crafting my pickaxe with my items flat on the ground and my back exposed to the world. Until another certain sandbox title, players must lay their items on the ground and slowly craft their items over time, so there was a small bit of tension when I was crafting something, knowing that my enemies could walk up to at any moment and knock me out. Fortunately, I made sure that no one was around and was able to create my pickaxe in peace.

Afterwards, I looked for a nice secluded spot in the desert area of the map and started to dig out a hidey hole where all my horded goods would be placed, but it turned out that my secluded spot was not as secluded as I hoped, because almost as soon as I crawled out of my hole to look for more supplies, a player threw a spear at me. I panicked at the sight of the spear and started looking for a place to run, but sadly, my attacker caught up with me and ended my character’s life. 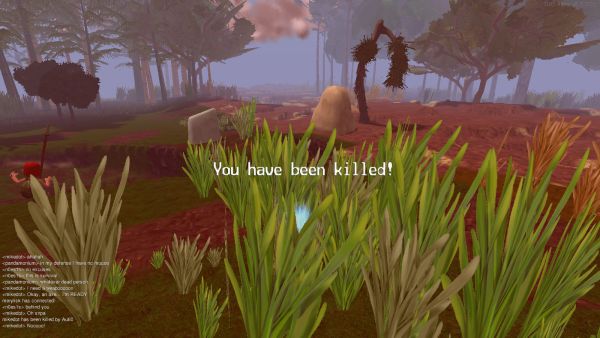 So my first match didn’t go so well. The second match, I wanted to take a more aggressive approach.

As soon as the second match started, I went off in search for my first victim. Once I spotted an enemy player, I attempted to attack them with my fists, and I sure wasn’t stealthy about it.

The only major flaw in my plan was the fact that players cannot attack each other using their fists. The devs mentioned that this will be changed in the future, but then again, matches could end pretty darn fast if players could just punch each other to death.

Anyway, after my not so brilliant plan failed, I had to run and hide for a bit before thinking up a new plan: Build a very simple weapon and play defensibly before nightfall. After rummaging around the forest for a bit, I was able to find the necessary pieces to create a simple battle axe, but after that moment, another fear came over my head, and it wasn’t from the enemies wandering the area, but from my character’s rumbling stomach.

TUG features a simple hunger system where players have to forage for berries and other edible foods to keep themselves from starving. With my hunger meter on low, I was able to find some berries to eat, and just in time, since the sun was setting quickly and when things get dark, it gets REALLY gets dark. Definitely not the kind of setting you’d want to be in if you want to seek out enemies.

After searching around for a gourd plant which can be used to light up the dark, one of the enemy players spotted me. I quickly took out my battle axe and attacked my enemy, but then the axe broke over their head! I panicked and tried to fight back using my pickaxe instead, but then THAT ended up breaking over the player’s head, as well. Apparently, crudely made weapons aren’t very reliable… Who knew?

So as I was completely defenseless, I started running for my life, jumping and ducking over hurdles, trying to shake the guy off, but it was no use. Plus, my character’s hunger meter was running dangerously low, so I was really in a tight situation. With no weapon to fight the guy off, and no safe moment to find some food to eat, I was a goner.

Overall, my experience with playing TUG was surprisingly satisfying. Despite the game being in an alpha state, and while I didn’t touch on any details for the creative mode, the survival games offer a lot of entertainment value for those with the right mindset. With the promise of dungeons, a more dynamic combat system and full modding support, TUG certainly has a lot of promise to stand out in a genre that’s started to get a little bit crowded, if you know what I mean.