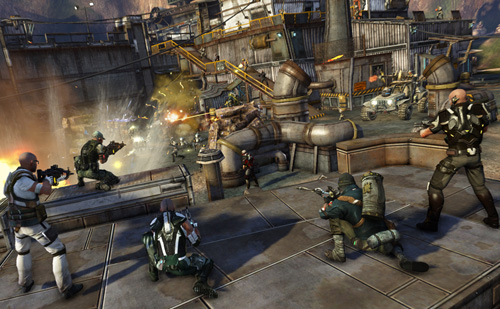 Trion Worlds announced that its sci-fi MMO shooter Defiance will go free-to-play on June 4 for PC and July 15 for PS3. The developer is also working with Microsoft on plans to make Defiance free-to-play on Xbox 360.

Once the game goes free-to-play, players will be able to download the game and experience the entire Bay Area storyline, end-game content, and future missions for free.

The free-to-play version of the game will introduce the Paradise Patron subscription option, which offers the following perks to subscribers:

• Boosts to Skill, XP, Scrip, Salvage, and Reputation gain rates that stack with boosts available in the store.
• 10% store-wide discount on boosts, costumes, lock boxes – all of it!
• A daily grab bag of two-hour boosts.
• Arkforge from Daily and Weekly Ark Hunter Bonus Lock Boxes. (Console players must link their accounts to receive these benefits and bonuses!)

If you already own the game, you’ll get a 30-Day Paradise Patron Pass and a grant of 1,000 Arkforge as well as the additional character slots, loadouts, ark keycode capacity, and inventory slots that all Defiance players who purchase before June 4 will continue to receive.

To learn more about the transition, check out Trion’s free-to-play overview.