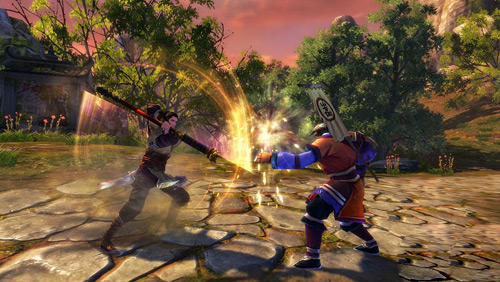 As a member of one of the ten class-defining martial art schools, players journey to master legendary fighting skills to engage in fierce real-time combat with members of rival schools and the Ming government. Swordsman welcomes both players who enjoy following the path through the power of its story and those warriors who rather blaze a trail of their own adventures.

Key Features:
• CLASSES – Choose from 10 martial arts schools to define your warrior! Each school employs a variety of different skills and strategies in combat!

• SKILLS – Defeat your opponents with impressive and visceral martial arts! Engage enemies using 3 sets of styles, with more than 6 skills in every style!

• STORY – Envelop yourself within Swordsman’s rich story and lore, based on the popular Chinese martial arts novel by author Louis Cha, aka Jin Yong (pen name).

• GUILDS – Create or join a guild to participate in exclusive events, establish a base that provides guild bonuses, and fight over territory!