You know, there’s something vivid about the word “Cruiser”. It’s one of those words that conjures up the image of what it means: large and powerful, but unexpectedly agile and speedy for such a large ship. Perhaps you can see why I compared them to wolves. These ships are fairly capable of “solo performance” and acting independently from the rest of the fleet, while also being effective in supporting their fellows in “the pack”. Perhaps it is their versatility that makes it hard for players to clearly grasp how to best play these ships. The role is quite clear for battleships – they are mighty and huge, while destroyers are sneaky and light. How then should we assess cruisers?

Playing as a Medium was not the way…

When I was initially invited to the World of Warships Alpha Test, cruisers were the first ships that I set my eyes on. Back then, I was attracted by the low reloading time and thus the high rate of fire. Nine high-calibre barrels each firing a salvo every 10 seconds – this was surely no place for jokes! Their manoeuvrability was also impressive. Unfortunately my World of Tanks experience was of no use. Fighting with your cruiser the same way you would with medium tanks is a really bad idea. Just imagine that the IS-7 that you’re about to corner fires not one, but six shells at you when you approach it. This is what actually happened to me in those early battles.

My strongest memory of those failures is when I was destroyed by a single (supposedly blind) salvo from a distance of over 30km. Damn, I thought, this really must be a completely useless vessel. However, in the following battle it was me on my cruiser that whirled around an enemy battleship in the immunity zone, peppering it with my salvos and distracting it from my fellow carriers.

So where is the power, folks?

The cruiser’s real power is its versatility. Want to repel enemy aviation? Engage a destroyer? Meet an enemy battleship with an HE salvo? None of these are a problem for a cruiser! High manoeuvrability and acceleration allow these ships to effectively dodge battleship attacks, while striking back at them with HE shells and easily clearing the decks of everything that isn’t welded down properly. Japanese cruisers are also capable of carrying torpedo launchers, making it possible for them to block strategic approaches. In proper hands, cruisers are very powerful tools indeed.

A cruiser’s survival in 1-on-1 battles largely depends on the overall course of the battle. For example, a direct head-on advance towards a battleship will obviously be suicidal, especially if you’re far away from the rest of your team. Despite a number of decent cannons, that rapid reload time is still not fast enough to beat a battleship one-on-one. On the other hand, engaging an advancing destroyer is likely to be far more successful. The short reloading time allows cruisers to lock precisely on to a target within just a minute or so, ensuring the enemy ship will be met with a sufficient amount of shells.

Packs of cruisers are even more menacing. Their anti-aircraft effectiveness grows immensely in groups, and dense cannon fire can present a threat to any opponent. A single pair of Japanese “Takao” class cruisers can perform intense torpedo attacks just as well as destroyers. In addition, survivability within a group is much higher than when solo.

Cruiser gameplay differs from ship to ship, depending on their construction and nationality. For instance, US ships are quite effective against enemy planes, whereas Japanese vessels possess somewhat weak artillery. However, those torpedo launchers compensate, allowing them to advance for aggressive attacks. 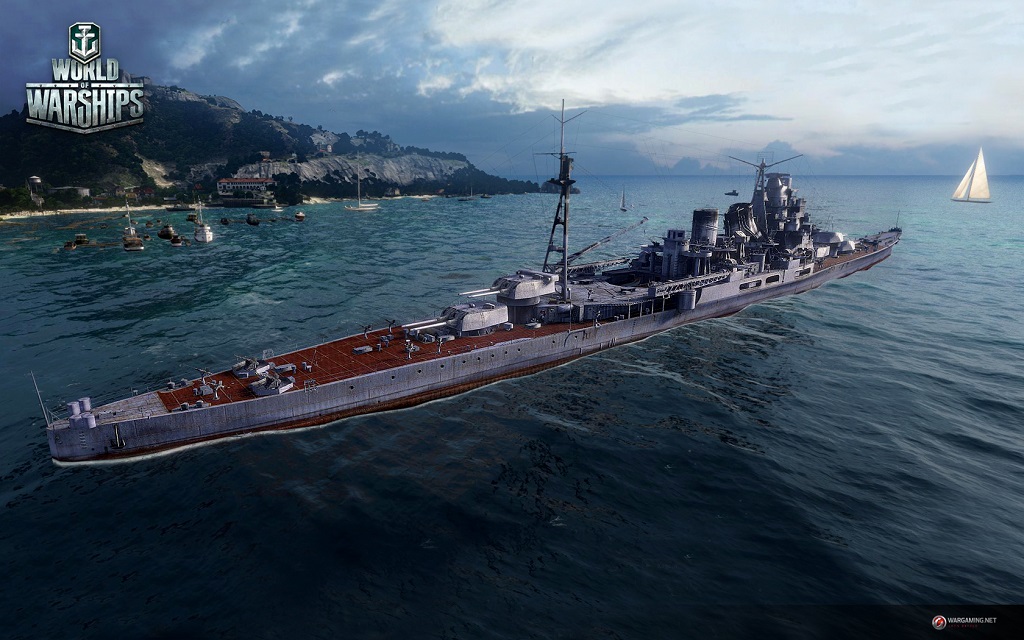 Captain, we have a ship full of noobs!

That versatility needs to be paid for. Essentially this means that you have to spend more time to master a cruiser. You need to spend your spare time tracking recon planes, aiming and shooting at destroyers while simultaneously dodging their return attacks – this is pretty complex activity for a newcomer. You’ll really need to be good at doing several things at once before you get your hands on a cruiser.

Take your time to master it and you’ll gradually become an advanced sailor. While they may be dynamic vessels, cruisers actually demand thoughtful and careful operation. These ships are precise tools to be used, sparingly and with exact timing.