RPG TITLES » World Of Warships » World of Warships: Enough Talk – Let’s Get to the Explosions!

World of Warships: Enough Talk – Let’s Get to the Explosions!

Here is the continuation of the article “How Naval Battles are Arranged: Part 4“
Author: Sergey Izyurov, programmer

Major damage inflicted by a shell is conditioned by its explosion upon impact. Of course, kinetic energy also counts, but the relevant damage will be considerably lower. A blast wave from an explosion occupies some characteristic areas, and the damage it inflicts will be equally distributed among all modules and compartments within it. Let’s have a closer look at this mechanism. Please keep in mind that being too close to an explosion may disintegrate you a bit, so you better put on safety helmet before we proceed.

The effect of an explosion may be inhibited, partially or completely. Each destructible area may have its own specific armor, along with a common armoring pattern. This additional armor may actually weaken the damage dealt (of course, only in cases when a shell hasn’t penetrated it, so the section escapes internal explosion). It would happen exactly in the same manner as if you have read something in the previous articles that blew your brain. The helmet couldn’t help you then, as the explosion was internal.

Reasonably, the damage also depends on the distance between the detonation epicenter and the destructible area. Thus, the internal explosion will surely bring the maximum effect. If a blast wave covers several adjacent areas, the damage will then be distributed among them.

So now we have to define what actual volume will be occupied by this specific explosion and what maximum damage may be dealt. Of course, you could just use imagination to estimate the numbers, based on your anticipations of the potential blast. But that would be too complex in the case of an enormous amount of naval artillery shells, especially making them proportional to each other and excluding obvious failures. Essentially, we would run into the similar problem that happened with shell trajectory computations. Game designers would then have a hard time tweaking and balancing all the parameters necessary for the main calibers, not to mention the anti-torpedo cannons. 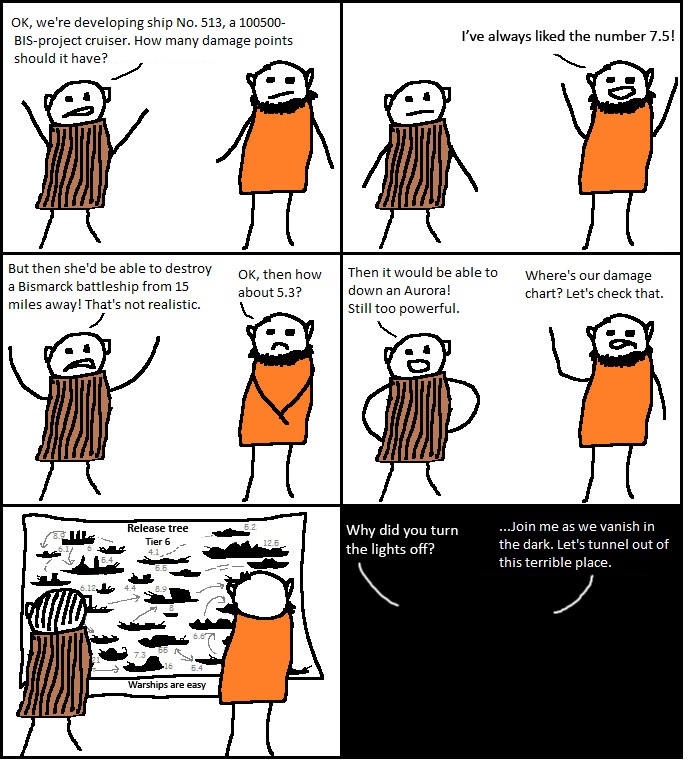 Having discussed this matter without a fight, the game designers and programmers finally came to a consensus. As we have decided to keep up with historicity, even for shell trajectories and armor piercing factors, it would be reasonable to stick to this scheme for damage computations as well. Well, indeed, will it be wrong to just define historical damage provided by each shell in form of “hit points = ship ‘health’” that it could take away from realism?

Of course, you won’t find such definitions in historical documentation. No ships ever built had any sort of hit points — this approximation was introduced specially for games. That’s why the term “historical damage of a shell” may sound quite confusing, especially keeping in mind those pesky hit points. But remember that the detonation of a shell is conditioned by the explosive charge within.  Obviously, the energy of a consequent blast is proportional to the amount of this charge. Moreover, the blast itself is essentially a rapid expansion of hot gases. And their volume (equal to the casualty area) also depends on the mass of the charge.

Thus, we may simply set the damage and casualty area proportional to the masses of relevant charges in various shells — this data may be easily obtained from the vast amount of documentation readily available. What coefficients to choose? Well, this depends on plausibility and the dynamics of the gaming process. All in all, these are now the only two parameters we have to tweak, instead of a potential hundreds of them.

Note that luckily, neither math nor mutant rabbits were mentioned this article

Something tells me the New Year wants us to be more kind to our readers.