World of Warships: Interview with Mikhail Fedorov: Head of Operations in St Petersburg

First, a few words about me: my name is Mikhail Fedorov and I’m head of Operations in Saint Petersburg. The primary task of our department is attracting and forming the core audience of our project, World of Warships.

What types of games modes are planned to be released in the game?

We have conducted many experiments and right now it is too early to say what will be added to the game, but I can assure you that we will have PvP (Player vs Player) for sure.

Do you plan to add historical battles? Will they be PvE (Player vs Environment) or PvP?

This is the issue that we are working on right now. We shall see. As for me, I like the idea of historical battles in PvE mode, but this is only my opinion as a player.

Will there be an opportunity to switch between Major Caliber and Secondary guns?

So what does the operations department do?

That’s a good question. Our task is to work with the community. There is no game, but we already have community for it and interest is huge. We need to work properly with this interest; most importantly, with people experiencing it. The fact is that we have a lot of naval enthusiasts and of course, many of them are waiting for World of Warships. This is understandable, but more and more people are willing to learn more about ships and we hope that it is just the beginning.

I think we all remember how interest in the military increased after the release of World of Tanks. One of our goals is to create an interest in ships – this is our ultimate aim. So how do we achieve it?

We have a blog (where we are right now) where we publish news from our project. Here you can subscribe for updates. We tell you interesting facts about game development and we have an official WoWS forum, where our future players, together with alpha testers, discuss different topics and we try to insure that they are not discussing inappropriate subjects. We also have a YouTube channel and Facebook page.
Our job is diverse.

After the game is released, do you plan to combine free XP from other Wargaming titles?

After release there will be combined free XP.

Should we start saving free XP for World of Warships?

Keep on playing World of Tanks and World of Warplanes. Saving XP is not necessary, as the first tiers are an important part of the game and history. You should not rush through the early tiers, but relax and have fun from the beginning.

Yes. You will be able to do this.

If an alpha tester records a battle and hides all the distinctive features (nickname, chat), will you be able to find this violator of the NDA (non-disclosure agreement)?

For sure we will find them. You have to understand that for each important issue we have the appropriate technology. The technology is not very complicated, but highly effective. Now our 2 former alpha testers will have to think how to pay the penalty for leaking the game video. The fine is $ 100,000, by the way and it is real. The video have been already deleted like it was never there.

If you are going to introduce submarines, will you add underwater bombs to cruisers and destroyers?

Depth charges are already in all 3D models of ships of certain classes. If we decide to create submarines, we will not have many difficulties with the depth charges models.

When will the game be available for testing?

Right now we have the alpha test. We want to go to CBT (Closed Beta Test) this winter, but we can’t promise anything.

Everybody knows that the battle ship Yamato was destroyed with a help of massive aviation attack. So do you think aircraft carriers will break the game balance?

All ships classes will be balanced. The carrier is indeed effective, but only in the right hands. If any of the US aircraft carriers happen to be within range of Yamato artillery, there will be no chance of its survival. So this how it will work in our game: even a destroyer can destroy a carrier with a precise torpedo salvo. All you need is practice and everything is possible.

The process of creating a game is multi-threaded and several of its aspects are being developed simultaneously. Could you please share which stage you are at? All (or almost all) the ships models are developed, ships are sailing, firing and sinking. These models, even without battleships, are enough to release the game.

Not really. We still have a lots to do. 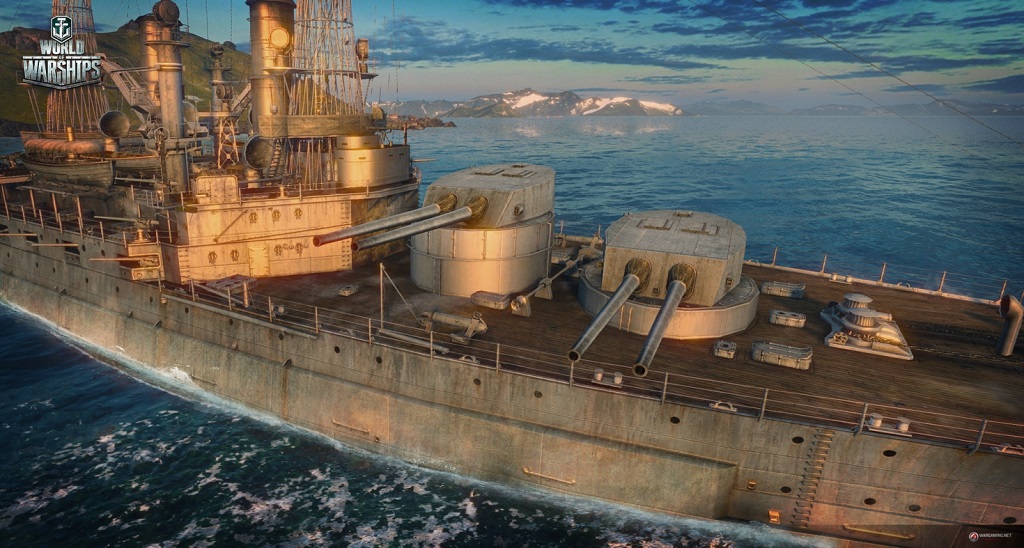 Are you planning to have a tutorial for each class of ships?

We will try to have tutorial for each class. Maybe not all at once.

Will aircrafts do any manoeuvres, such as barrel rolls? Or any counter-flak manoeuvres?

Not barrel rolls – only for beauty maybe. As for counter-flak manoeuvres, yes.

The gameplay on aircraft carriers is unique. It is similar to RTS (real time strategy), but with some modifications. The concept of resources is quite different. Yes, there will be German tech tree. As a player I would be very disappointed if I do not see any “H” battleships, though I haven’t seen this in-game yet.

How is the animation of ship destruction implemented? Will we see turrets flying off and ships being split in half?
Ships destruction will be dramatic and epic. Our designers and programmers are working on it right now. You will see ships split into several pieces and ammunition explosions. Ships will sink spectacularly.

In one of the recent videos, a tech tree was shown to public. Will there be new modules added, for example, research of AA guns and secondary guns?

The list of modules which was shown on video is true for that particular ship. Other ships may differ. All that you listed in your question is possible.

Why have you chosen the BigWorld engine for developing this new project?

The same question was asked at gamescom by one of the journalists. “Does World of Warships use the BigWorld engine or something else?” So I suggested to the journalist, as he is specialist in this area, to figure it out himself. The journalist had difficulties to determining it exactly, but the question eventually solved itself. Let’s just say, no worries, everything will be great.

Will be there a possibility to use AA guns for shooting enemy ships in close distance?

No. AA guns are only for fighting with aviation. 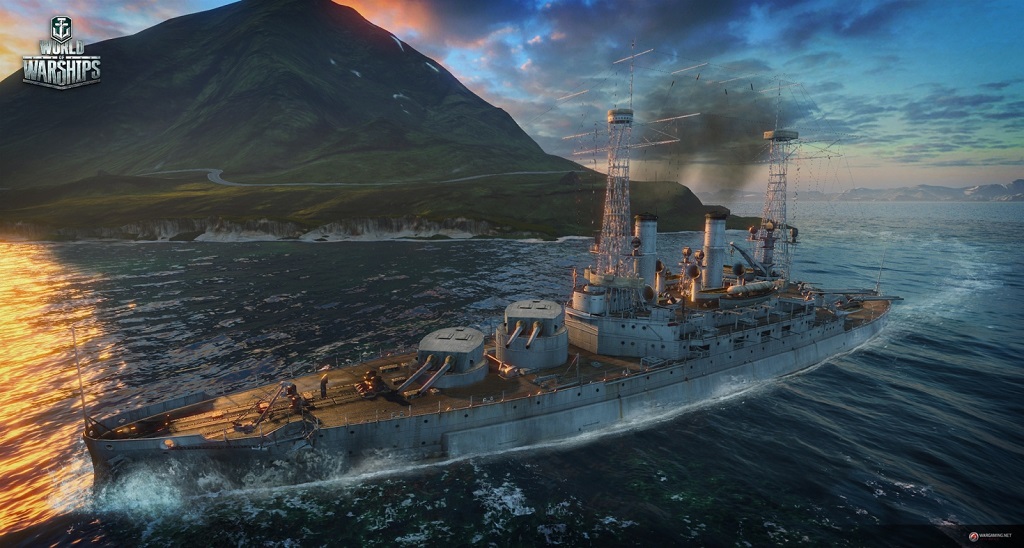 Will each of the guns have its alpha-strike?

If you switch to torpedoes, will the MC guns return to its default position or will the guns continue to fire on marked target?

When you switch to torpedoes, MC guns remain in the positions you left them, but they will not fire without your participation.

If you compare World of Warships with previous Wargaming titles, it seems to be like World of Tanks, where tactical planning plays an important role. Will the terrain force players to search for the right tactical positions? Or will their positions play a secondary role and the game be based on players’ cooperation?

Yes, all these things will happen, but not everything at the same time. Friends, it is important to understand that battles in World of Warships are happening on a flat, smooth surface. It is quite a difficult task for game designers to create interesting and breath-taking gameplay in such conditions, but our game designers are up to the task and tactics plays a primary role in the game.

I have a question about aircraft carriers: will you be able to control only one plane?

No, you will be controlling a squadron and it will not be like a simulator.

Are you going to add German fleet and if yes, are we going to see aircraft carriers? And will be there a battleship “Bismarck?”

Yes , there will be. The “Graf Zeppelin” together with the “Bismarck” will be in the game.

Are you going to add anchors to the game?

How will damage from ramming work in the game?

An enemy ship can get visual damage from ramming; it can break into two and sink.

Are you planning to add torpedo ricochets and damage from it, like in World of Tanks?

We are not planning to have torpedo ricochets.

When will the game be released?

Answers to these questions can differ. “Unfortunately, no one knows when the game will be live” or “Game will be live when it is ready”. It is up to you what to choose.

You should understand it is not because we are greedy that we are not releasing the game. No, the game should be released only when it is ready. From the economic point of view, cooked pasta and raw pasta is equal. But if you are offered raw pasta, you would refuse it or eat not much. We don’t want this to happen to our players. It is important that we want to offer you not just simple “pasta”, but an amazing dish from the best game chefs. Be patient and you will be rewarded.

Thank for your questions and your time.