RPG TITLES » World Of Warships » World of Warships: Through the Eyes of an NA Alpha Tester 2, pt. 2

World of Warships: Through the Eyes of an NA Alpha Tester 2, pt. 2

You can find the first half of this article here: Through the Eyes of an NA Alpha Tester 2, pt. 1

While my AA gunners managed to take down one of the bombers, the remaining four dive down and deliver their deadly payload. I wanted to say “Well, that was that!”, but then I realise that, even though they did massive damage…I STILL LIVE! They took out another two of my turrets and my ship is hanging together with virtual duct tape, but I still live!

When my damage control teams manage to get the engines back up and running, I slowly but surely get underway again. With a top speed of only 16 knots due to the engine damage and the large amounts of water my ship has already taken on, I once again set a course to certain doom and destruction. If I got to go down, I’ll at least apply the golden rule and take as many of them with me as I can!

A few seconds later a salvo of large calibre shells hits the water near my ship…and another salvo…and another!

xThecanadianx and Schultz, those dastardly rascals, both in Yamato’s have obviously found me while I have no idea where they are. It didn’t take long before the 18.1″ shells started to land on my ship, taking away the few hitpoints I had left and shortly after my proud ship, which had served me so well, went down. 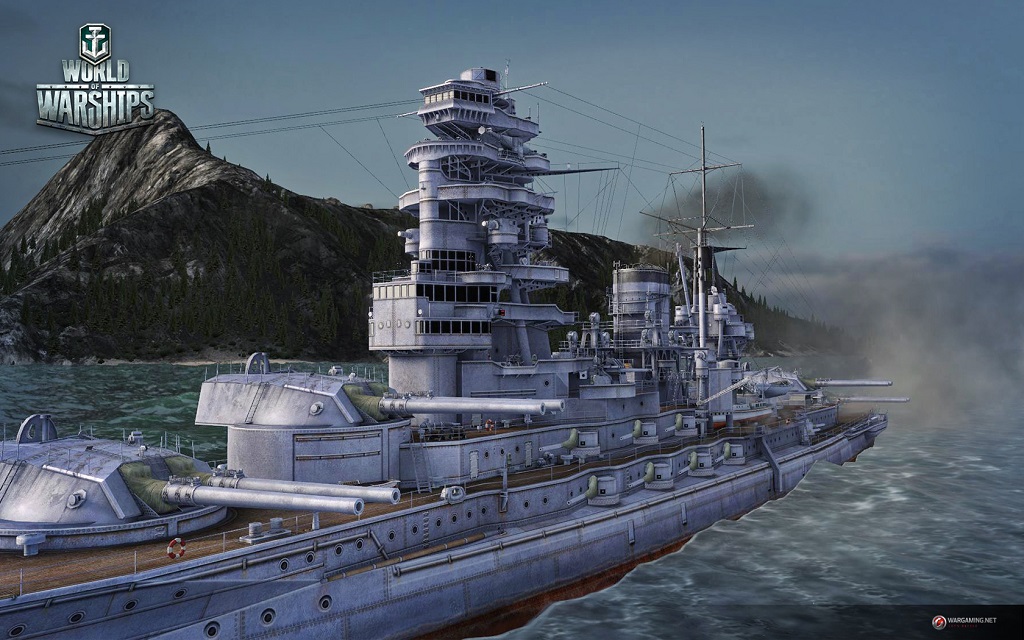 Welcome to the World of Warships Alpha, where the game is being tested, but no less important, a LOT of fun is being had!

Without going into details (and me losing my access to the game due to a breach of the NDA) I can say that this is one of the smoothest games I’ve ever tested. The screenshots do not lie: the game DOES look that good when you put the graphics on max. It’s a pure joy to see your ship in action, but it’s also more of a game for the thinking man. As described above, going Rambo and rushing towards the enemy is a one way trip to the bottom. All ships have their strengths and weaknesses and not one plays the same.

Also, there are no detectable “national traits”, for instance, a tier X USN battleship can have a completely different play style than a tier Y battleship. It’s all according as it was in real life…except ships had no health bars in reality.

Personally I’ve fallen deeply in love with the battleships. The sense of power these ships give have no equal in other games. But this does not mean that you’re this invincible floating piece of metal! As described above, there are many dangers that can easily take you down. A well placed salvo of torpedoes from a destroyer or torpedo bombers or bombs from a divebomber can severely ruin your day. 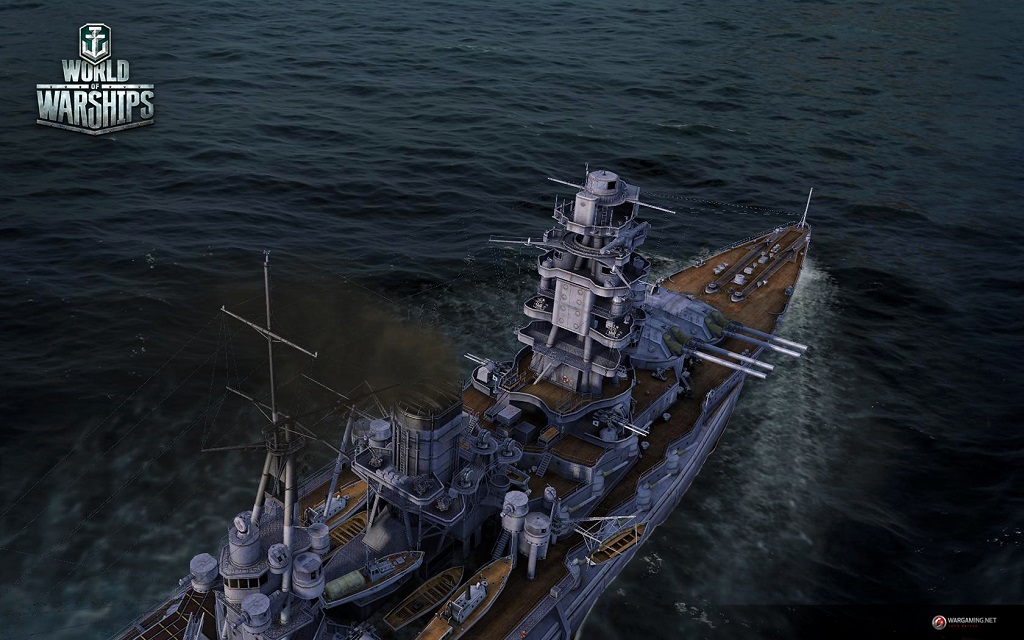 Destroyers are just made of pure fun. In my opinion you can have two play styles with them: you can do high speed charges at the enemy while dodging incoming fire, launch your torpedoes and get the hell out under the cover of a smokescreen, or play defensively and cover your battleships with smokescreens, hiding them from view from the enemy.

Cruisers are a bit in the same boat as destroyers. You can go on the offensive and try to take out enemy destroyers, cruisers and carriers, or if you’re lucky and armed with torpedoes, a battleship! On the other hand, you can also stay with your own team’s big boys and cover them with your AA guns, something the USN ships  are especially good at! (as they were in real life)

And then there are carriers, the class I’ve found difficult to like, but easy to hate as they tend to ruin my day when I’m in a battleship.

It’s just not my play style but they can be so very, very, dangerous when used by a skilled player. More than once I’ve been on a team which was, on paper, the superior force…only to be denied our victory because the enemy carrier’s fighters took down all our scouts, removing our vision on the enemy ships while they could see us.

But the most important aspect of all is teamwork. If you cover each other you can achieve so much more. Sticking together improves your AA coverage, reducing the risk of enemy bombers, you can focus fire on a target, you share line of sight, cover each other with smokescreens and simply improve your chances of survival and reduce that of your enemies. 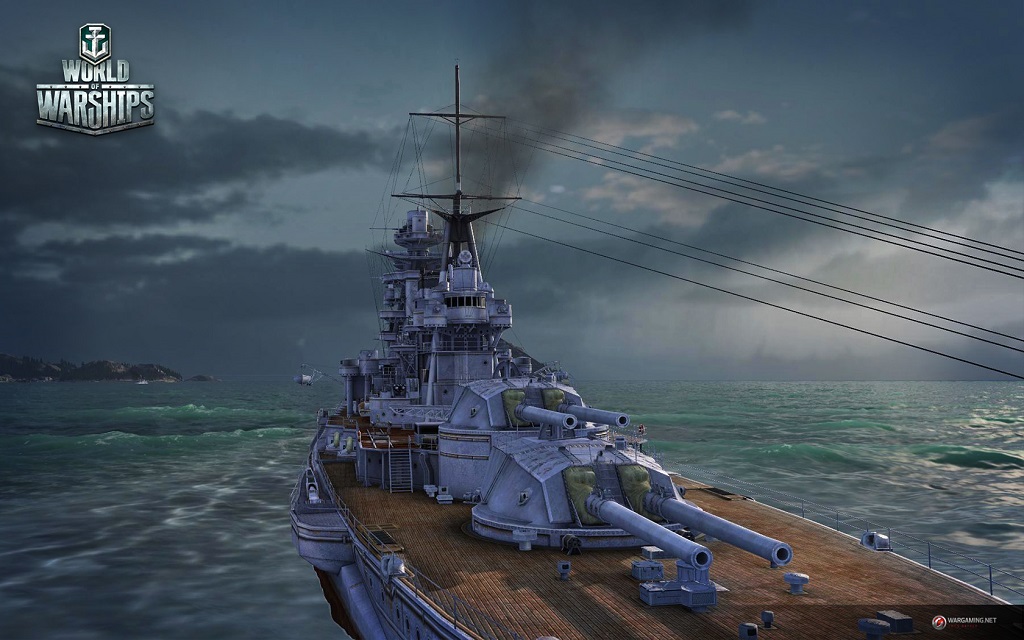 And while it’s nice to critically hit a tank in World of Tanks, it doesn’t come close to the satisfaction of firing a salvo at 30+ kilometres, waiting 15 seconds for your shells to arrive, see them slamming through your targets deck armor and Hood-ing (that’s our term for ammo racking) your foe.

Even though that means that can happen to you as well…

As the timer was ticking down (in World of Tanks style) for the game to start, I found out that my buddy/arch nemesis, Ariecho, was on the other team and it didn’t take long before global chat was saying “Primary target: JeeWeeJ”.

As the game got underway It didn’t take long for my team to find the enemies, and while I sailed in a group of three battleships I did indeed seem to be the primary target, as I was targeted by what seemed to be the entire hostile fleet. I fired two salvo´s towards my nemesis…and then I was looking at my ship going up in a brilliant explosion.

“Oh well…” I sighed “I didn’t like this ship anyway…” and I went back to select another ship and go back into the queue.

It’s not easy to be a self-proclaimed public enemy #1, with everyone out to kill you…but I wouldn’t have it any other way!